Frog Hollow Bikes is the bike shop for everyone. We strive to provide the highest quality bicycle sales, service, maintenance, and cycling education to Middlebury and surrounding communities. We offer a wide range of road, mountain, and commuter bicycles in addition to accessories for cyclists of all types. We are always working to improve, expand, and promote all types of bicycle use in the Middlebury area.

We are authorized dealers of Trek, Cannondale, GT, Bianchi, and OPEN bike sales and service. 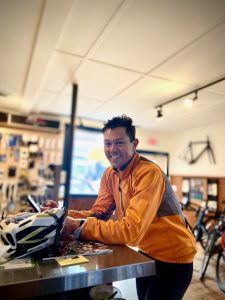 Carl has over 25 years of experience as a mechanic in top bike shops in Prescott, Tucson, and Flagstaff, AZ, and in Middlebury, VT, where he moved with his family in 2005. A former amateur racer — road and mountain — and now owner of Frog Hollow Bikes, Carl still finds time to join in local rides and adventure races, like the Vermont Overland and many other organized rides and races in VT. Carl has a degree in Parks and Recreation Management from Northern Arizona University.

Carl has been an active board member of the Addison County Bike Club (ACBC) since 2016. Carl hopes to further develop the trails in and around Middlebury, making mountain biking accessible for riders of all ages and abilities. Carl also stays involved with the community by being on the Middlebury Parks and Recreation board, volunteering for the Middlebury Area Land Trust and the Walk and Bike Council of Addison County. 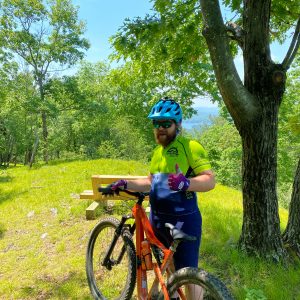 Jon is a local boy born and raised just a few miles outside of Middlebury. While in high school his bike riding turned from just a passion to a competitive side. Jon began racing Downhill and soon moved up through the levels to Expert. After a few years of racing his riding style morphed into the “if it has two wheels I will ride it” mentality that it is today. You can find him anywhere from the beautiful country roads on his road bike to riding his mountain bike down the ski slopes of the local resorts.

Jon started his bike shop jobs right here in Middlebury at the Alpine Shop. Since then Jon has worked at multiple shops from the SkiRack in Burlington to shops in Stowe. Jon joined the Frog Hollow Bikes team in 2016, where he has taken on the role of the head mechanic.

When not fixing or riding bikes Jon can be found spending the days with his wife and daughters.